What’s the Dark Web Saying About the US Presidential Election?

A sign of the times? It looks like even the dark web has a serious case of election fever.

With tomorrow’s presidential election generating tremendous interest in the U.S. and around the world, both the candidates and the election’s major issues have recently been popular topics of conversation on the deep and dark web. To shed light on what actors on underground forums are saying about politics and current events, we at Sixgill published a new report today examining this discourse.

The report, Dark Web Politics: A Guide to 2020 Election Chatter on the Dark Web, provides insight not only into the specific political leanings of actors on the dark web, but also the beliefs, values, and interests that shape their perspectives. Its findings are based on a large-scale analysis of relevant posts on underground forums since October of last year. Specifically, we looked at posts that mentioned either candidate (or both candidates), hot-button issues likely to shape voters’ decisions, and ideologically-driven hacktivism campaigns.

How has the dark web’s interest in the election changed over the past year? The numbers show that monthly mentions of both candidates rose almost every month between October 2019 and September 2020, more than tripling over the course of those 12 months. In each of those months, we saw far more mentions of Donald Trump than of Joe Biden. But, given that posts may be positive, negative, or neutral, this finding doesn’t necessarily indicate which candidate is more popular among actors on the dark web. 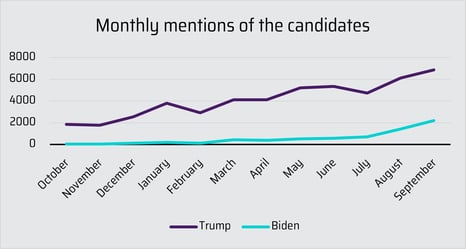 Figure 1: Mentions of the candidates on deep and dark web sites

Some of the discourse we discovered was brash, but other political discussions on the dark web showed more nuance, as shown in the specific examples of posts cited in today’s report.

The dark web on the issues

To show how the dark web views the major issues likely to affect the outcome of the election, today’s report also examines mentions of 10 specific topics between October 1, 2019 and September 30, 2020:

Of these issues, the vast majority of mentions we found – 74% – were about COVID-19. In fact, we have seen several times more mentions of COVID-19 than of the presidential candidates over the course of 2020.

The second-most discussed topic was the economy, accounting for 11% of mentions. Next came racial inequality at 5%. None of the other issues were above 3% of mentions.

We can understand the popularity of COVID and the economy over other campaign issues. First, they are not just American, but global issues, so they were being discussed by a broader audience. Second, we can suggest that most dark web actors are financially-motivated and therefore care about topics that more tangibly affect them--health and finances.

In contrast, hacktivists are  dark web actors that are ideologically-motivated. While they comprise a very small subset of total actors, they make noise. Overall, our analysis identified 151 references to hacktivist campaigns related to U.S. politics and social issues. Some of these were threats or declarations of future hacktivist campaigns, while others went so far as to include personal details of specific people (doxing). Most of the targets referred to in these hacktivist posts are associated with either the far right (such as the Proud Boys) or governmental authorities (such as Minneapolis municipal employees).

With the U.S. presidential election coming up tomorrow, this is a fascinating time to see what people are saying about politics and social issues on the deep and dark web. Not only can these conversations shed light on important matters of cybersecurity, but they can also provide valuable insight into the actors’ leanings, perspectives, and values. Looking at both the big-picture trends and specific examples of posts offers us a unique opportunity to see what these actors really care about and how they view today’s pressing issues.

For a closer look at what underground forums are saying about tomorrow’s U.S. presidential election, download Dark Web Politics: A Guide to 2020 Election Chatter on the Dark Web.

Cyber-threat actors may plot against their targets by using secure, instant-messaging platforms and...

No Child’s Play: Why Gamers’ Activities on the Dark Web Are Serious Business

What’s not to like about online gaming? While it’s easy to think of it as a means of fun,...

Introducing DarkWebster: Dark Web Slang for Noobs and Others

Have you ever shown up to a place where everyone was using so many weird terms and jargon that you...